A scripture speaking about the prophet Nephi in the Book of Helaman contains an interesting phrase the we often skip over.   In verse 11 of chapter 10, the Lord commanded Nephi to go and cry repentance to the people.  His response in verse 12 is very instructive.  See if you can pick it out.

12 And behold, now it came to pass that when the Lord had spoken these words unto Nephi, he did stop and did not go unto his own house, but did return unto the multitudes who were scattered about upon the face of the land, and began to declare unto them the word of the Lord which had been spoken unto him, concerning their destruction if they did not repent.  (Helaman 10:12)

Note the phrase "he did stop and did not go unto is own house, but did return".  We often quote the "go and do" scripture (1 Nephi 3:7) as an example of obedience, but this one gives an additional perspective on a new level of obedience.  He immediately stopped what he was doing, he didn't go home, and he went and did what he was instructed to do.  Sometimes we put the prompting on our "To Do" list rather than simply getting up and getting it done.  President Monson reminded us:

"Don’t postpone a prompting; rather, act on it, and the Lord will open the way." (Thomas S. Monson, "Stand in Your Appointed Place", April 2003 LDS General Conference)

Another example of this type of immediate obedience is found in Matthew Chapter 28:5-8
5 And the angel answered and said unto the women, Fear not ye: for I know that ye seek Jesus, which was crucified.
6 He is not here: for he is risen, as he said. Come, see the place where the Lord lay.
7 And go quickly, and tell his disciples that he is risen from the dead; and, behold, he goeth before you into Galilee; there shall ye see him: lo, I have told you.
8 And they departed quickly from the sepulchre with fear and great joy; and did run to bring his disciples word.

Notice how they departed quickly and they ran to fill the commandment of the angel.  Finally, this quote by Elder Eyring is a great reminder for each of us to commit to quickly do whatever God asks of us. 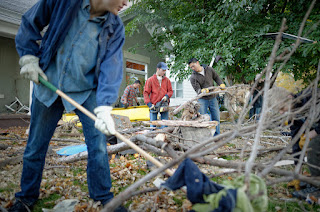 "A loving Heavenly Father and His Beloved Son have given us all the help They can to pass the test of life set before us. But we must decide to obey and then do it. We build the faith to pass the tests of obedience over time and through our daily choices. We can decide now to do quickly whatever God asks of us. And we can decide to be steady in the small tests of obedience which build the faith to carry us through the great tests, which will surely come." (Henry B. Eyring, "Spiritual Preparedness: Start Early and Be Steady, October 2005 LDS General Conference)
Posted by LBP at 2:43 PM