As I listened to the baptismal prayer recently, a thought came to me.  What does it mean to be commissioned of Jesus Christ?

Many years ago I received my commission as a 2nd Lieutenant in the US Air force. I knew that my commission appointed me to my rank, gave me authority to perform certain duties, and officially charged me to function in that rank.  The Oath of Office is recited upon commissioning and is administered by a higher-ranking officer who will raise his or her right hand and recites the Oath of office aloud while the officer taking the oath repeats the words.  That oath states:


“I [state your full name], having been appointed a (rank) in the United States Air Force, do solemnly swear  that I will support and defend the Constitution of the United States against all enemies, foreign and domestic; that I will bear true faith and allegiance to the same; that I take this obligation freely, without any mental reservation or purpose of evasion; and that I will well and faithfully discharge the duties of the office upon which I am about to enter. So help me God”

This Oath of Office is required by federal law. But it has a greater meaning than simply reciting some words on a page. When you take the oath, your oath is your word. The Oath of Office serves to remind you of your obligation to serve your country.

As I reflected on this experience and the statement “Having been commissioned of Jesus Christ” I realized that unlike taking the oath of office, I don’t remember standing with my arm raised and taking an oath when I received the Melchizedek priesthood.  I do remember sitting with hands laid on my head and having the priesthood conferred upon me.  I also remember that there is an oath and a covenant associated with the Melchizedek priesthood.  Did I somehow miss taking an oath?

We gain some additional insight on this idea of the priesthood oath in this quote by Elder Renlund from the October 2017 LDS General Conference:


"To each man who receives the Melchizedek Priesthood, God affirms His covenant promises with an oath. This oath pertains only to the Melchizedek Priesthood, and it is God who swears the oath, not the priesthood holder. Because this unique situation involves His divine power and authority, God uses an oath, employing the most forceful language He can, to assure us of the binding and irreversible nature of His promises. (Dale G. Renlund, The Priesthood and the Savior’s Atoning Power, October 2017 LDS General Conference.)

When we receive the priesthood by confirmation, we are benefactors of the oath God has made with us as well as the blessings of the covenant.  So, why do we have the priesthood conferred upon us rather than taking an oath?  The Latin root of the word confer has two parts.  First “con” which means together and “ferre” which means to bring.  With that in mind, confer means to bring together as well as to give or to bestow.   So what does this confirmation bring together?  It appears to be helpful if we read the first phrase from D&C 20:73. 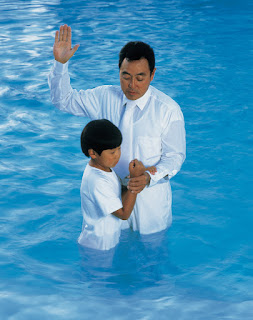 "The person who is called of God and has authority from Jesus Christ to baptize, shall go down into the water with the person who has presented himself or herself for baptism, and shall say, calling him or her by name: Having been commissioned of Jesus Christ, I baptize you in the name of the Father, and of the Son, and of the Holy Ghost. Amen." (D&C 20:73)

Note that it states that the person performing the baptism must be both called of God and have authority from Jesus Christ.  The confirmation of the priesthood seems to bring together the call to serve, the authority to act, the appointment to the commission, the binding of God’s oath, and the promises of the covenant.  With this confirmation, we then can go forward and use this commission to bless the lives of others.  President Thomas S. Monson said:


"Miracles are everywhere to be found when priesthood callings are magnified. When faith replaces doubt, when selfless service eliminates selfish striving, the power of God brings to pass His purposes. The priesthood is not really so much a gift as it is a commission to serve, a privilege to lift, and an opportunity to bless the lives of others." (Thomas S. Monson, Do your Duty - That is Best, October 2005 LDS General Conference)